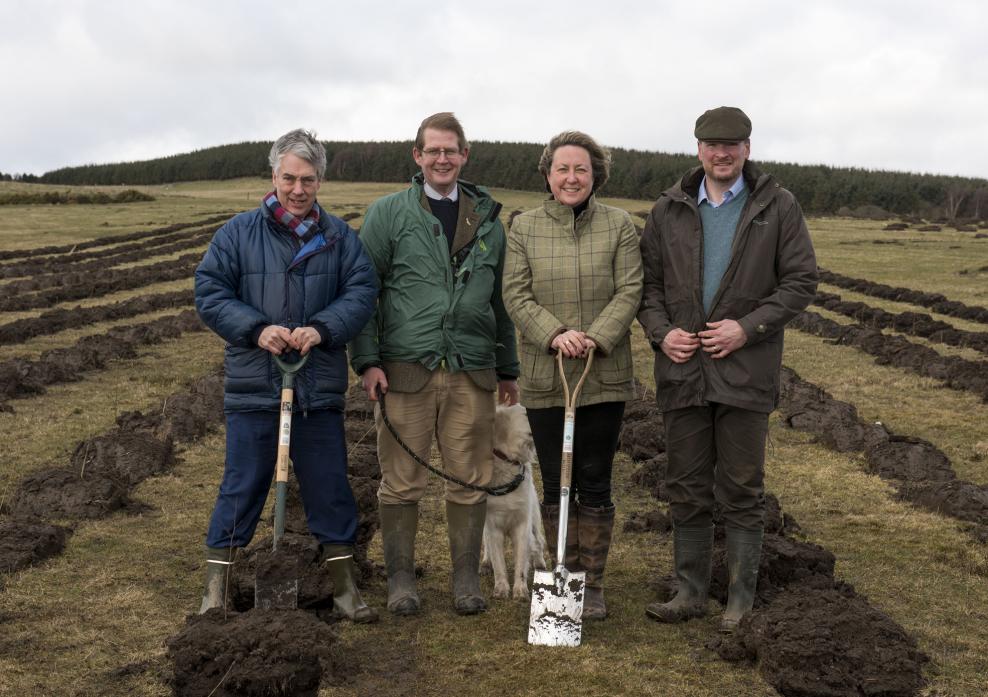 By edwardmilbank20th May 2018October 19th, 2021Teesdale Mercury
No Comments

Teesdale’s Andy Howard has blazed a trail in Northumberland as the force behind England’s first conifer-heavy woodland in more than 30 years. He spoke to reporter Alex Metcalfe about the project.

ANDY Howard has blazed a trail in forestry in the past six months. The Barningham villager is leading a project to plant 600,000 trees on Doddington Moor, in 350 hectares of Northumberland countryside.

His scheme was given the nod on degraded pasture last last year and planting is already underway. But the scheme faced a long battle to get off the ground – coming up against pressure groups and a sea of regulation.

He pops in to the Mercury offices to tell me what he’s been up to and why it matters to Teesdale. Mr Howard says: “It was still a major challenge and ridiculously hard to get buy in because a lot of people had a preconception of what it could, or should, be. “They were trying to undo what nature had done which was just ridiculous.”

It will take three years for planting to be completed at Doddington with materials from the forest eventually going towards building homes and helping industry.

The Stang Forest and Hamsterley are two of the standouts in Teesdale but Mr Howard explains how devolution and regulation differences north of the border make all the difference to the forestry industry.

He says: “Every single week I am looking for properties with potential afforestation properties – for example, we’ve just sourced a property in Scotland. “Upland sheep farming in Scotland is a lot harder than in the northern England and the next generation do not want to carry on from their predecessors.

“Farmers are looking to sell up or reduce the size of their properties as it’s getting harder and harder to make money from sheep farms,” he says. “Scotland is a lot further down the line in terms of selling up and moving on.”

The sheer amount of land available in Scotland and the absence of designated AONBs (Areas of Outstanding Natural Beauty) often make it a far safer investment for forestry than here. Devolution means Scotland’s branch of the Forestry Commission reports to the Scottish government where ministers takes a less stringent stance on the industry when compared with English regulations.

Mr Howard adds: “The biggest challenge in the North of England is the AONBs and the national parks – these have created ‘forestry preferred zones’. “This is where they say they’d like forestry but it’s all broad-leaf with a small amount of conifer.

“Their priorities of what forestry should be are very different to what it would be for commercial intentions.” Then comes the raft of other parties which have a say when it comes to large scale forestry plans.

Mr Howard adds: “It’s not easy with the Forestry Commission, the county council, the RSPB, national parks and the Wildlife Trust and heritage – anyone who wants to have a say, will. “The favourite phrase they had was ‘the right tree in the right place’. “That implies a tree can be wrong – how can a tree be wrong?

“They use this phrase to say because we are in a protected scenic area we should only have broadleaf trees. “But 6,000 years ago 95 per cent of the country was forest anyway. The open vistas you see now are not natural – they’re man made.” There is a sense these frustrations still linger with Mr Howard.

However, Doddington offered a litmus test to see whether these views could challenged. Mr Howard says: “Alnwick is very close by and we had public meetings. People would come along and those that had concerns were usually about planting too many conifers.

“Then we tell them whether they realise of the 24,000 hectares planted in the past, 23,800ha were broadleaf trees and only 200ha were conifers. “Or, whether they realised the ‘perfect natural scene’ of Alnwick Gardens isn’t natural. When they were told it’s man-made they’d say ‘oh right’ – it was this issue of perception.”

But what does this all mean for forestry in Teesdale? Well, the North Pennines AONB means much of the land area of the dale is out of bounds when it comes to commercial forestry. And Mr Howard tells me he’s seen dale farmers frustrated by red tape when it came to planting on the smallest of scales.

“Durham County Council initiatives support planting hedgerows but when it came to planting broadleaf trees to increase coverage to protect stock on the farm, the process to get financial support for it was very convoluted,” he says.

“So he just bought the trees himself and planted them for increased shelter. He has made the decision off his own back and with his own money”. Mr Howard believes uncertainties over Brexit will prevent any “major step change” in the next couple of years when it comes to upland forestry policy.

And past mistakes in forestry still loom large in the minds of doubters. Vast swatches of uplands were planted with dense mono-cultures in the middle of last century which in turn hurt biodiversity and affected native species.

Regulations and laws prevent anything of the sort nowadays – but those trees planted in the 50s and 60s are now reaching maturity, meaning some of the mis-steps of the past are at their most visible today. Mr Howard says: “The industry has not helped itself in some respects – when the Stang, Hamsterley and Kielder were created you could plant wall-to-wall sitka spruce.

“Now the UK forestry standard has come in with best practice and you just cannot do that any more. “You cannot plant more than 75 per cent of a type of tree – you’ve got to have mixes.”

But Mr Howard believes the perception is changing one step at a time. He rounds off by telling me how his team went out to an agricultural show to find out what people thought of Doddington – and uncovered surprising results.

“We were out all day and we were mobbed,” says Mr Howard. “People either said ‘great’ or ‘fantastic idea’ or people walked up with issues and concern. We explained it and every single one of them was more than happy. “The principle concern was to make sure we weren’t building another Kielder.

“Some thought we hadn’t changed because the trees planted then are at their biggest and most obvious now – but it’s only now that we can correct those mistakes on the ground,” he says.